The concept of Unbuntu is often resumed by the words : « i am because we

are » Yoga means yoke which can be translated by many words like, connection

or union. Those two philosophical concepts have similarities but some

Similarities : Yoga teaches us compassion and compassion is definitely a major

point of Ubuntu. In the yoga sutras Patanjali explains the concept of ahimsa,

non harming other people or purself, in Ubuntu if you harm someone else it’s

like harming yourself. You have to get rid of your ego to embrace ubuntu and

yoga clearly helps you with that, ego tends to diminish and connectivity rises. In

yoga we have to look at when ego limits our possibility. , ego is neutral. Ego is

simply a sense of “self” or personality, the thoughts and reactions of a mind

shaped by experiences, preferences, habits, and fantasies. As humans, we

share this phenomenon, and ego-identification creates boundaties hat keep us

separate from each other as well as from recognizing

the pure gold of our own true nature. As we learn to recognize the

mental patterns and defenses that Patanjali describes, we become

more comfortable in the role of witness. We gain perspective that allows us to

detach from the ego self. I would say here that somehow, yoga gives the tool to

accomplish ubuntu. Also the idea of karma, what we give is what we receive

Ubuntu is a concept that is only philosophical in a way, yoga covers more field,

than that. Yoga takes care of the body too, so we can have an healthy mind in

an healthy body. Yoga has also a spiritual dimension, it helps controlling an

individual’s mind, body and soul. I am a soul, a spirit, living in a body. The idea

of Ubuntu is that we depend on human connection, i don’t think it’s

totally true in yoga. Some yogi tends to love being isolated to meditate

and try to attain enlightment. The connection we talk about in yoga is more

the connection between mind body and soul, which will lead to a control of the

ego and that’s where yoga and ubuntu have the same ideas. 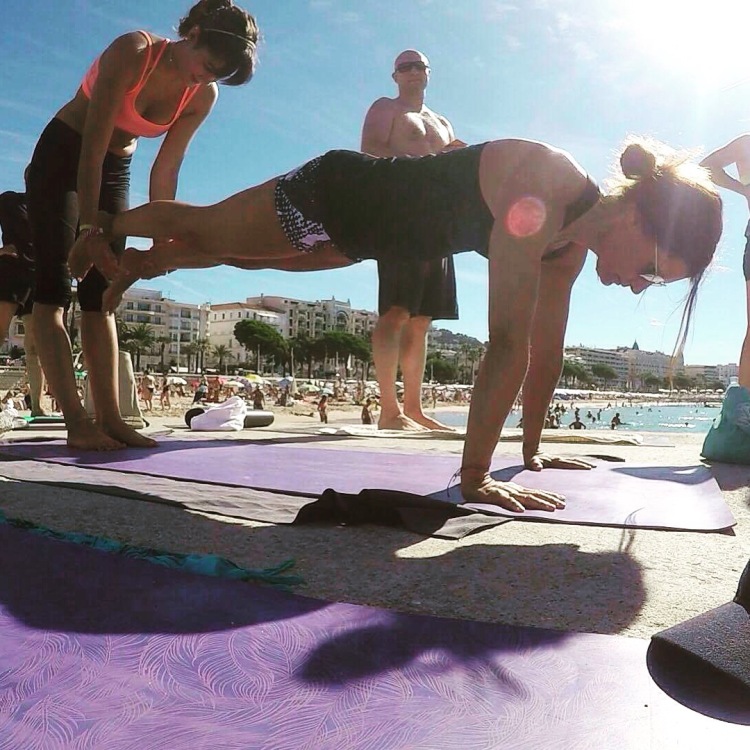 SmartFLOW yoga teacher. I've studied Power vinyasa, restorative, and yoga for pregnant woman with Tamal Dodge in Los Angeles. After that wonderful time, I felt attracted by movement and flow, so I studied with Shiva Rea for 300 hours her Prana Flow style. But after a yoga for scoliosis workshop and after realizing what I want in my practice and for my students, I've decided to focus on a more alignment focused yoga, and started studying with the great Annie Carpenter. Now, after more than 400h with her, my teaching skills had changed for the best. The more I learn the more I have to share with my students, so I follow different trainings every year and I had the great honor to learn from amazing teachers like Krista Cahill, Maty Ezraty or Dona Holleman. I'm now teaching SmartFLOW YOGA, Hatha yoga, restorative yoga and chair yoga (for people with less range of motion) in Monaco most of the time, but also in some magical events such as Burning Man in Nevada. http://instagram.com/cheyenneyoga/ Ambassador of a great VEGAN BOOTS BRAND pawj california, think cruelty free Ugg style boots. Use the code Cheyenne10 for 10% on their website. Yoga inspired jewelry designer: Pepper Kreation View more posts